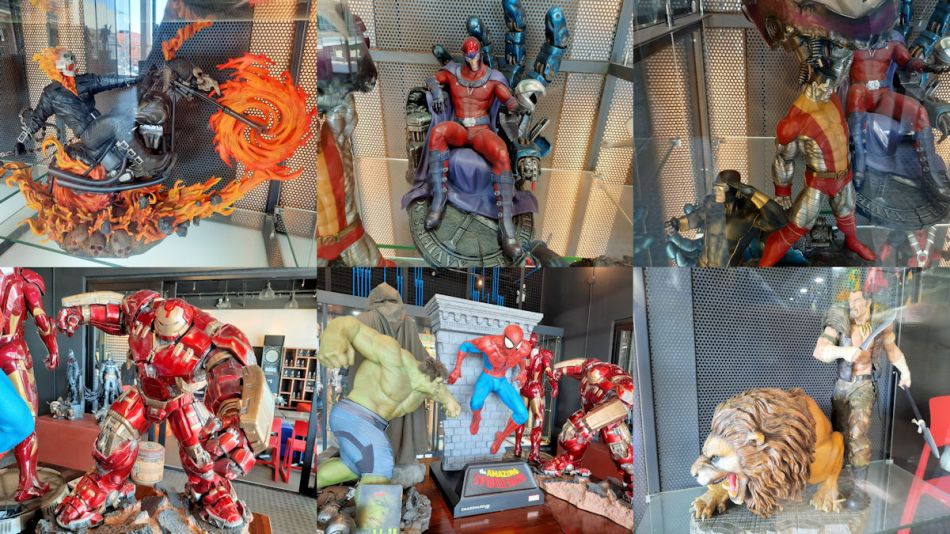 Love Superheroes? Head on up to the second floor of Paseo Verde in Bacolod City to discover G Cafe + Darts Live – a new, awesome cafe that combines online darts, coffee and superhero statues!

G Cafe + Darts Live has two spaces. The first space is a cafe where you can enjoy some small pastries and play online darts (Dartslive 2)

The online darts game is very interesting. You actually play against people from all over the world. You use special plastic darts and the game sends your score to an online leaderboard where you can see the scores of all the people playing Dartslive 2. It’s a great game to try and play.

G Cafe + Darts Live has newly opened and they’re still finalizing the menu. For now, they serve a limited amount of pastries and coffee. They will be updating the menu in the days to come so stay tuned for updates.

The main attraction of G Cafe + Darts Live are the BEAUTIFUL superhero statues. They are very detailed and extremely large. They’re beautiful collector’s editions too. This is the largest and most expensive collection of superhero statues in Bacolod City.

Each of these statues are extremely detailed. You will enjoy seeing all the small intricate stuff on the pieces.

Some of the statues have hair and even clothing. Every detail is complete – down to the Hulk’s chest hair. Most of the statues are in big, lit glass display cases.

The best time to visit G Cafe + Darts Live would be in the late afternoon or in the evening. They’re open from 10am to9pm. However, if you go early the sun from Paseo Verde’s parking lot bounces off the concrete and shines directly into G Cafe + Darts Live‘s display cases. The reflections makes viewing the statues and picture taking difficult.

If you’re a huge nerd like us, you’ll recognize certain heroes and villains such as Kraven the Hunter. Kraven’s statue is big but the most impressive feature is the HUGE lion that accompanies him.

Some of the sculptures use clever tricks to make it appear that the character is flying. Here’s an awesome statue of Doctor Strange, sorcerer supreme – complete with The Eye of Agamotto.

Another favourite character of ours also makes an appearance. Ghost Rider! He is doomed to forever ride to protect the innocent and punish sinners!

Our favourite megalomaniac mutant Magneto makes an appearance! Magneto sits on a throne fashioned from the hand of a Sentinel – a vicious, mutant-hunting robot.

There are TWO basic rules to follow in G Cafe + Darts Live.

DO NOT TOUCH THE STATUES.

This is the first and most important rule. If you’re going with kids – make sure they know the importance of NOT touching stuff. These are extremely EXPENSIVE statues and if they fall and break – you will be paying a LOT of money to replace these.

BE ON YOUR BEST BEHAVIOUR.

That means, no clowning around. Watch your step especially when you try to take pictures with these statues. You might fall and injure yourselves.

BUY SOMETHING TO SUPPORT THE PLACE.

As of writing there is no entrance fee. But it would be really nice to support the place by buying their food or playing a game of darts!

The Bacolod Food Hunters wrote this article for free! We did not accept payment, free food or accomodation. We practice ethical blogging.