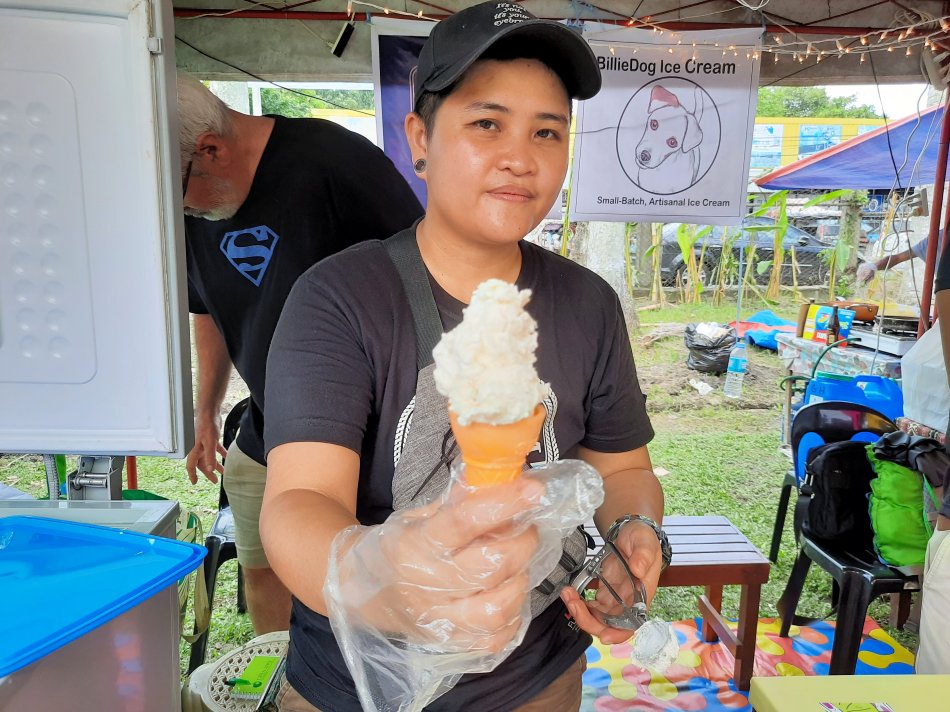 We were at Silay’s Adobo Festival when we ran into friends – Chris Juricich and Angela, his wife. Both are artists and Chris makes the most delightful sketches about people and places he sees.

It was Chris who pried us away from our adobo and chorizo pudpud and brought us to a stall that had a hand-lettered sign.

“Home Made Ice Cream” the sign boldly proclaimed. It was then we noticed the freezer with a picture of a dog, its head cocked entreatingly at us.

We took a closer look at the sign and noticed that they had all sorts of flavors. But these were not just any ordinary flavors, they were ice cream flavors made using fruits found in the Philippines and on Negros Island! They had Batwan, Sambag, Spiced Kalabasa, Mulberry, Guyabano and Papaya lime ice cream!

Batwan is a sour brown fruit that is commonly found in soups like Sinigang to give a distinct sour taste. It is something not usually found in desserts and sweets. Would this ice cream be an epic fail?

We got a scoop of their Batwan Ice cream to start with. We got our cones and took a big bite..

Wow! What an amazing flavor experience! The ice cream was silky smooth with an unfamiliar mouth feel. We later learned that this was due to the fact that BillieDog ice cream is 80% lactose free and made with soy. The batwan flavor was there but this time it was a pleasant sourness that mingled with the sweet ice cream. It was an absolute delight!

We tried another flavor, this time we got the Sambag / Tamarind ice cream. This is also a big winner in our books. Tamarind has a very distinct, strong taste but the creaminess of the ice cream somehow tames it and makes it very enjoyable and pleasant.

Papaya lime and Kalabasa spice are also great flavors – Papaya lime has actual fruit chunks in it while the Kalabasa spice is a distinctly Filipino take on the popular pumpkin spice flavor. It uses Squash instead of pumpkin.

We met Don Kusuanco, the creator of BillieDog’s delightful artisanal Ice Creams. We learned from Don that he’s raising funds with the sales of his ice cream for his medical mission in Mindanao. Billie Dog Ice Cream sources ingredients from local farmers and supports local indigent community projects too.

Pretty soon after the pictures and introductions were made, the stall was soon swamped with customers and every tub of ice cream was sold out.

Check out Billie Dog Ice Cream. They have a stall at the Negros Farmers Market that will be there until December. You can also call to make orders or get your ice cream fix from Damgo Coffee Shop in Silay.

0 comments on “BillieDog Ice Cream: The most amazing Ice Cream on Negros Island!”