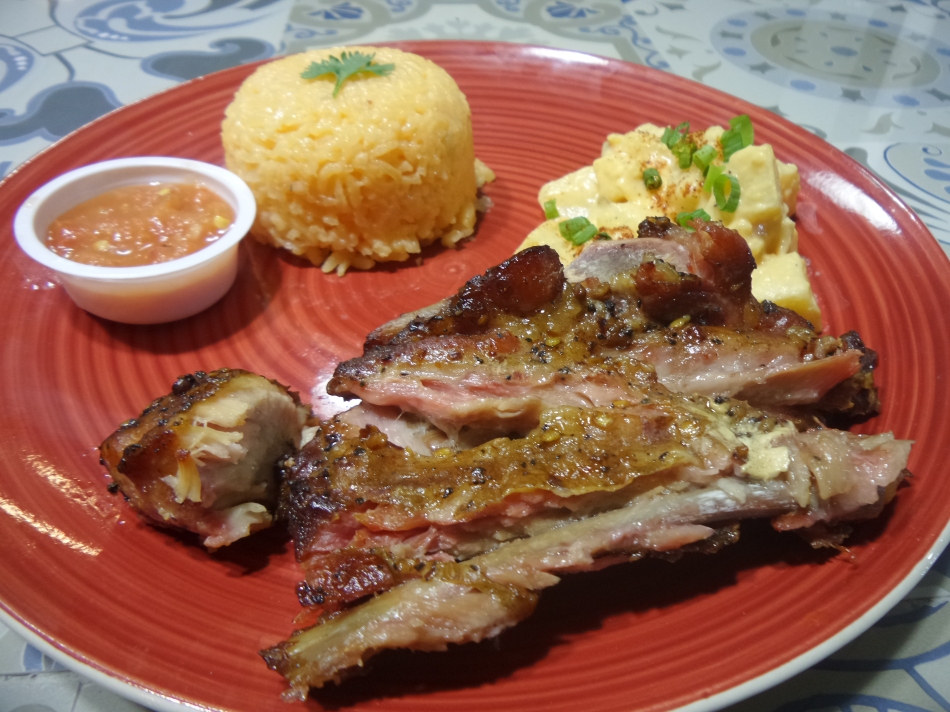 They’re back! Los Trez Amigos is open once more in Bacolod and serving their famous Puerto Rican Food.  You guys loved their famous smoked ribs, pulled pork sandwiches and other Mexican-Latino dishes so much that owners Dave and Jasmin Garcia decided to open a bigger, better restaurant.

Their new location is at the entrance of Villa Celia subdivision, Libertad street (P. Hernaez) just a few doors down from BIR District office 77.

Dave Garcia is a Puerto Rican so he decided to design and paint the house just like the ones in Puerto Rico. The outside facade of Los Trez Amigos is a striking blue and white.

The inside of Los Trez Amigos is  gorgeous, looking very much like a trendy Mexican cantina.  The interior has a lovely Latino atmosphere.  Everywhere you look there are beautiful murals on the walls depicting rural scenes of Puerto Rican life.

The best sellers at Los Trez Amigos are their tacos, burritos and their famous hickory smoked pork ribs.  First they marinate the ribs in a special sauce then Dave smokes the ribs using  hickory wood chips until the meat is very soft and tender – falling off the bone.

There’s also something very special at Los Trez Amigos that I’ve never seen served in a restaurant anywhere else in Bacolod – Tamales!!  These are so good!

Tamales starts out with cornmeal or masa.   The cornmeal is made into a soft dough enveloping a savory mix of meat.  The whole thing is then wrapped in a corn husk then steamed.

Los Trez Amigos also has smoked chicken wings and chicken legs. These are also prepared the same way the ribs are made.  Each bite is filled with delicious smoky flavor.

Fancy a mexican style pizza? This “pizza” is basically a big tortilla sandwich!  It consists of two tortillas topped with vegetables, salsa and the filling is a combination of meat and refried beans.  Tasty and filling.

One of the best sellers are the authentic enchiladas that Dave makes.  Dave spends hours making corn tortillas from scratch. He fills them with either  beef, pork or chicken along with refried beans and then it is served drizzled with a mexican sauce and melted cheese.

We also recommend Los Trez Amigos’ Super Triple burger.  It’s a smoked beef patty topped with bacon and pulled pork.  Dave bakes the bread himself.  It comes with fries and ketchup and this is a very solid, very filling meal.

I pulled the top of the burger to see what was inside.  Mmm!!!  Look at all this meat!

Los Trez Amigos also has delicious homemade desserts.  We tried the Lemon cheese cake. It was good!  The cheesecake is smooth and silky with a perky, tart lemon taste.

Try out Los Trez Amigos.  They’re back and better than ever!  Check out Bacolod’s first authentic Puerto Rican/ Mexican-Latino restaurant!

This is a non sponsored post.  The Bacolod Food Hunters did not receive any freebies, incentives or money for this review.

0 comments on “Back in Bacolod! Los Trez Amigos and their Mexican-Latino food!”