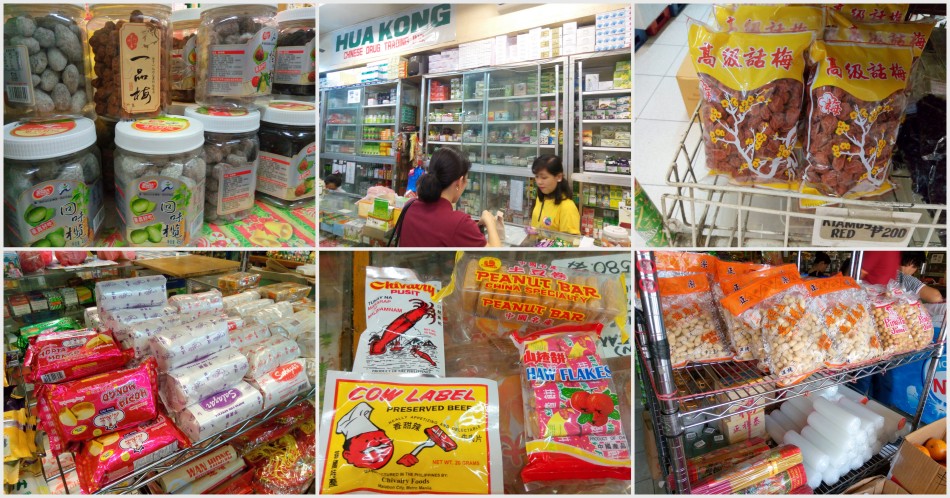 HuaKong Chinese Grocery is one of the oldest stores in Bacolod City.  This store has been open since 1947 serving generation after generation of Bacoleños.  HuaKong only closes TWO days in a year – only on Good Friday and on New Years day.

The original HuaKong store is located on Tindalo Avenue, Bacolod Shopping district. As a wee lad, I used to come to HuaKong with my family on special occasions.  The store’s stocks change whole year round.  During the Mooncake festival – the shelves are filled with mooncakes – On Chinese New Year – Tikoy and during Christmas – grapes, apples, chestnuts and ham.

We paid a visit and here’s some of the awesome things that are available whole year round.

The front of the shop has metal shelves which are packed to the brim with popular snacks.  There’s tubs full of original White Rabbit milk candies,  Lemon drops, Peanut Bars, Haw flakes and fortune cookies.

A true child of the 80’s and 90’s grew up knowing what Haw flakes are and had their lips stained red with Kiamoy! Sadly, these snacks are becoming less common as kids tastes have changed.

The Spice section in HuaKong is extensive.  There are all sorts of sauces, spices and ingredients – some from China and perfect if you want to give your Chinese dishes a real, authentic Chinese taste.

Pro tip: Check out the pork floss and the dried sausages in this section!

Everybody loves sausages!  Lots of Chinese sausages hang from hooks in the spice section as well as dried noodles. These useful sausages find themselves as ingredients in all sorts of dishes such as siopao (meat buns) and stews.

HuaKong also has all the sauces to make your favorite Chinese Dish. Some of these such as ketchup and lechon sauce are familiar to Filipinos but there are some rare and unusual sauces from China as well.

In fact, HuaKong has some of the rarer ingredients such as Japanese Dashi for making soup stock.  You don’t have to buy a lot!  In true sari-sari store style, you can buy the ingredients in portions.

If you’re into making your own tocino or hams – Huakong has prague powder – a special curing salt used to preserve the meat.

If you want cinnamon – well, Check out these – actual large pieces of cinnamon bark!

There is also a modest selection of nuts as well.

What would a Chinese store be without Hopia? There’s a lot of them sourced from the best Chinese bakeries in the country.

We especially love these giant 1/2 kilo cracker nuts. These can be served as appetizers at parties or snacks for guests.

Try out these delicious Salt and Lemon Candies!  These are unusual because they have salt as an ingredient. As a result – the candy is not overly sweet or lemony but it is sourish with a hint of salt.  It’s an acquired taste but very addicting.

The Chinese medicines take up an entire wall of the store.  These are all OTC or over the counter medicines. Some are traditional Chinese cures or beauty treatments and soaps.  These medicines are substantially cheaper than branded products.

Chinese medicine has been practiced for thousands of years and many Bacoleños swear by the stuff they get at HuaKong.

Some of the medicines are quite unusual. Got a sore throat? Try out an African Sea coconut lozenge.

For Snacking – HuaKong can’t be beat!  Check out our snack haul.

Peanut Bar – This snack is made with crushed peanuts and molded into bars. This is not overly sweet. The natural sweetness of the peanut and the rich nutty taste makes this taste so good.

Chivalry Pusit –  This is best described as “candied squid”.  Dried squid is coated in a sweet-sour red powder. A pack has a couple of pieces.  Very delicious but it is an acquired taste – some might not like it.

Cow Label preserved beef –  The pack contains oil and small portions of dried beef. The beef is salty-sweet.  The oil makes it difficult to eat as a finger food. It is tasty but also an acquired taste.

Haw Flakes – Childhood memories of tearing open a cylindrical pack of haw flakes, sharing them out and playing “Holy Communion” with the round, flat disks. Sour and sweet.

HuaKong is one of our favorite places to visit and we highly recommend paying this awesome shop a visit.  Coming here is stepping into a whole new world – you get the feeling you are in China. Check out the sweets, the goodies and all the other good stuff!

HuaKong is open from 8am – 7pm. Opens Mondays to Sundays. They are located at 65-67 Tindalo Avenue, Bacolod Shopping district.

The Bacolod Food Hunters did not receive any freebies, incentives or cash for writing this article. We practice ethical and honest blogging.