Brewery Gastropub has opened its Bacolod Branch!  They are located at Paseo Verde, Lacson street.  We went on the second day of their opening to see what they had to offer.  Brewery Gastropub serves imported beers, craft beers and food.  Unlike bars where all they serve are drinks and small snacks, Brewery Gastropub actually serves meals and is very family friendly.

Like all new restaurants in Bacolod, the place was filled with people eager to try out something new.  We went early at about 6pm to be able to get seats.

Inside, the place had a lively, bustling atmosphere. Families were dining out, people were seated at barrels that doubled as a table. The place was air-conditioned and everything was brand new.

On one side, they had a display shelf with all the different beers available!  They have a wide selection of great beers.

On the side they have draft machines with different beers on tap.

One of their draft beers, the Hoeegarden Rosee got our thumbs up.  It is a fruity, low alcohol content beer that tastes like raspberries.  This is a great beer that is very refreshing and its fruity taste is very appealing. Quite enjoyable to non-beer drinkers like me!

The Brewery Gastropub has a ton of food available – we ordered two of their house specialties.  The first one is their Rack of Skewers which consists of Lime chicken, grilled Bratwurst, Hungarian sausage and Thai pork. It was a bit pricey but the meat and sausages were really good.  The sauces used to cook the meats were flavorful and tasty. 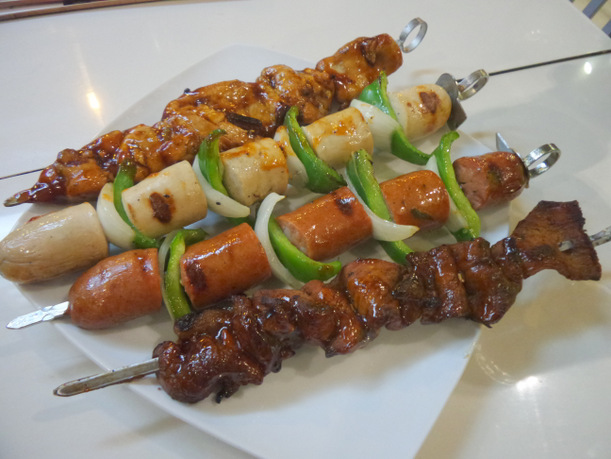 The rack of skewers was served in this contraption in which you simply pull off what you want into your plate.  Cute and artsy.

The meals came with three sauces, all of which we loved.  The green chili sauce is very good and served to spice up the beer can chicken.

The appearance of the chicken was VERY surprising because we saw on various Facebook posts that it came as a whole chicken – and we CERTAINLY didn’t ask them to cut it up.   We proceeded to try it and we found it very dry, tasting like old, reheated chicken and served a little hot. – we had a suspicion that it had been prepared beforehand and simply reheated or worse, leftover chicken from the previous day.

Fortunately we had the three aforementioned sauces and a barbecue sauce that came with the chicken because we had to liberally douse the chicken for it to have any semblance of taste.  We saw several tables of customers -early birds like us- get the same chopped up chicken and thought, “This must be really how they serve the chicken?” We were mistaken.

One hour later, while we were dining, the table next to us got a freshly made beer can chicken – it was served whole, not cut up like our chicken and looked plump, moist and juicy. It certainly was VERY different from what we were served. The customers began carving it and wow, it looked moist and  tender – a far cry from what was given to us.

All I can say is – when you dine here and you want to try the beer can chicken- be sure you instruct the waiter to not serve you chopped up chicken and serve the chicken WHOLE and freshly cooked so you can avoid getting dried out, potentially left-over chicken. It is a shame that we didn’t get what we paid for when we visited.

Besides the fuss over the chicken, Our waiter made a mistake and gave us a 500 peso beer instead of the 235 peso beer we ordered. When we told him that this wasn’t what we ordered – He apologized and told us that he wasn’t familiar with the beers despite us previously pointing to the beer we wanted on the menu before we ordered.  This little mistake meant we went way over budget and had to send one of our party to a nearby ATM to get more money.  We decided not to complain to the manager because it was their second day and probably the cost for the beer would be deducted from the poor waiter’s salary.

In conclusion, the brewery Gastropub is an ok place to visit for DRINKS.  We loved the drinks but found the house specials to be a bit too pricey and they have some service issues to iron out.  We are certain in time that they will fix their issues so visit them for a great place to try craft beers.

The Bacolod Food Hunters are not part of any blogging organization or group. No incentives were given for this review.