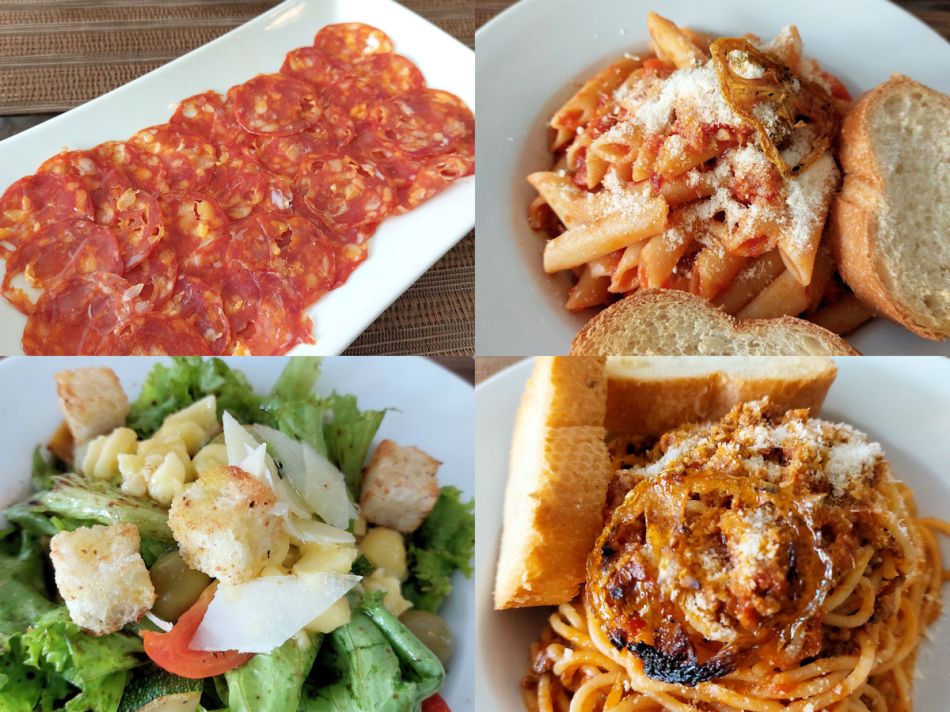 The Bacolod Food Hunters is your guide to the best restaurants in Bacolod City!

Capriciosso Deli Ristorante and Casa Del Formaggio is one of our favourite restaurants in Bacolod City. This establishment makes and sells Italian style cheeses using milk from their own farms here in Negros Occidental! It’s something to be proud of!

Capriccioso Deli Ristorante offers its signature cheeses, Pizza and Italian dishes as well as their own ham, sausages and cold cuts. They have delicious, freshly made pasta as well. They have cheese platters and ham platters for ordering.

Capriccioso Deli Ristorante is owned by the same owners as Casa Del Formaggio – the only cheese makers here in Bacolod!  The owners make the cheese from milk sourced from local dairy farmers in Murcia and they have a lot of different kinds of cheese ranging from mozzarella to peperoncino (pepper cheese!)

We’re really proud of the cheese that Casa Del Formaggio makes!  It’s so inspiring to see that local ingredients sourced from local Negrense farmers can make world-class quality products. You normally wouldn’t associate a hot tropical country such as the Philippines to be a cheese producer and yet in our beautiful island of Negros, there exists beautiful, Italian-style cheese.

Here are some of Casa Del Formaggio’s awesome products! We highly recommend their Burrata and Mozzarella cheese!

Burrata is a very interesting cheese as it looks like a little pouch. The outer pouch is a firm white cheese while Inside the pouch is mozzarella and cheese! This is a premium artisanal cheese and it’s amazing we have something like this in Bacolod city.

Real authentic Mozzarella is white in color and firm to the touch.  Casa Del Formaggio stores its mozzarella in pouches filled with brine to preserve the mozzarella cheese. The words “Fior de Latte” on the packaging  means that the mozzarella is made from fresh pasteurized milk. We bought a pouch to take home and the mozzarella was in a round compact ball with a springy, rubbery texture.  Melted down, it became soft and easy to spread!

Of course, If you’ve got all these beautiful cheese and Italian ingredients, you have got to make Pizza! We started out by ordering their gorgeous Mozzarella balls. They’re little buns stuffed with mozzarella cheese and they’re SO good.

Capriccioso Deli Ristorante’s pizza is handmade when you order it and they use their own ham, cold cucts and cheese! It’s cooked using a special oven. The result is a delicious, freshly baked pizza. The appearance of the pizza is different taste is totally different from commercial style pizza. It’s more personalized and home-like. Very tasty!

Capriccioso Deli Ristorante makes their own ham and bacon that they smoke and then glaze.  Unlike other hams, their ham is not that salty. Instead it has a milder flavor.  They use local ingredients – the meat, the bread in their platter are all sourced locally.

You can also buy their sausages and cold cuts and have them cooked in the store for a minimum charge.

Capriccioso Deli Ristorante serves their sausages Filipino breakfast style – with rice and an egg. You can customize your breakfast by adding on more sausages, egg or rice. Here’s our breakfast dish of sausages, bacon and egg!

If you’re in the mood for a quick snack, try out Capriciosso’s Nachos. These come with meat and cheese or just plain cheese. The cheese is the special ingredient! The in-house cheese makes the nachos taste so good and different from other nachos here in Bacolod city!

Capriccioso has also great salads! Our favorite is the chef’s salad and it has a lot of roasted veggies, olives and topped with cheese. Very good!

Please try out Capriccioso Deli Ristorante.  They’ve got a lot of delicious food on their menu besides pasta. It’s a great place!  They’ve got Italian wines, beer, ham and whole lot more! The owners also own Green Harvest – a local food producer that has assorted bottled products and goods! Definitely worth checking out!

Take note that this place has only three tables and is more of a showcase/show room of their cheese and products rather than a restaurant.