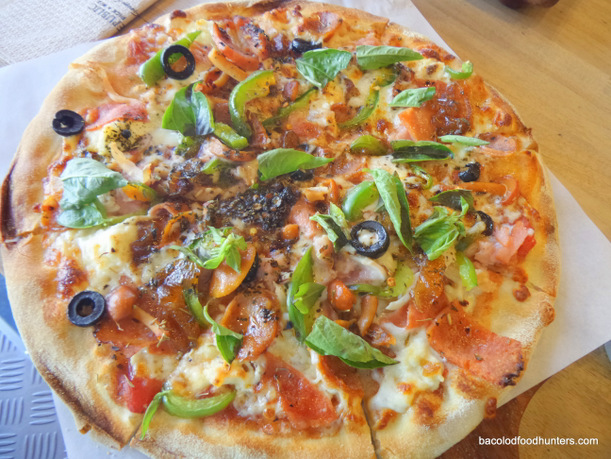 Pizza Republic Pick + Mix by Guiseppe Genco – Wow, that name’s quite a mouthful for a Pizza restaurant.   This popular pizza chain has a branch located at 22nd street – Lacson street, Bacolod City and it’s famous for letting its customers CREATE their own pizza.  Pizza Republic has been open for quite a while now in Bacolod and we visited them to try a Pizza challenge that my friend proposed: To make a pizza centering around a theme!

My friend proposed that I make a “farmer’s pizza.”  I gamely stepped up to the challenge and surveyed the big and diverse amount of ingredients and toppings that Pizza Republic had to offer.

Customizing your own pizza is very easy in Pizza Republic Pick + Mix.  All of the ingredients are laid out in front of you in a long table and it’s simply a matter of telling their nice, friendly attendants what toppings and ingredients you want on your pizza.

For my “farmers pizza”, I pictured in my mind a hard working Italian Farmer working out in his vineyard.  I went with Plain Italian Sauce, cream cheese, mozzarella cheese and a sprinkling of parmesan.  There were plenty of giggles and good-natured ribbing between me and my friend as he criticized my choices:  ” That’s not what a real farmer would eat!”  he joked.

I had to think long and hard when it came to the next set of ingredients.  Since this was a “farmers pizza” I couldn’t go overboard with the ingredients. I chose to simply have black olives, green bellpeppers and some small interesting mushrooms called Funghi Famigliola.  Translated into english, this meant “small family mushrooms.”  They looked so cute with their little stems and caps! “Maybe the Farmer’s little daughter went gathering mushrooms in the forest that day.”  I explained to my friend.

For meat and spices I went with Pizza Republic’s smoked chicken and pepper salami.  Then I added a sprinkling of black pepper, rosemary, caramelized onions and oregano and had them top the pizza with fresh Basil.  Then the Pizza was brought to the oven and after a while it was ready to eat!

It came out cooked quite perfectly!  The cream cheese gave the pizza a nice creamy taste and the vegetables and mushrooms added some texture.  The meats and sauces gave the pizza a nice savory taste and the crust was a bit chewy and a little crunchy – just the way I liked it. The caramelized onions were a bit too sweet so the next time I make a pizza at Pizza Republic Pick + Mix I will be sure to leave them out.

My friend also tried his hand with making a pizza – in his case I challenged him to make a “Spanish pizza.” He went all out with the ingredients and loaded his pizza with a lot of things he thought were “Spanish.” We had a lot of laughs about it!   The very nice thing about Pizza Republic Pick + Mix is that if you want a LOT of toppings on your pizza they will gladly do it!  They are happy to create whatever kind of pizza the customer wants.