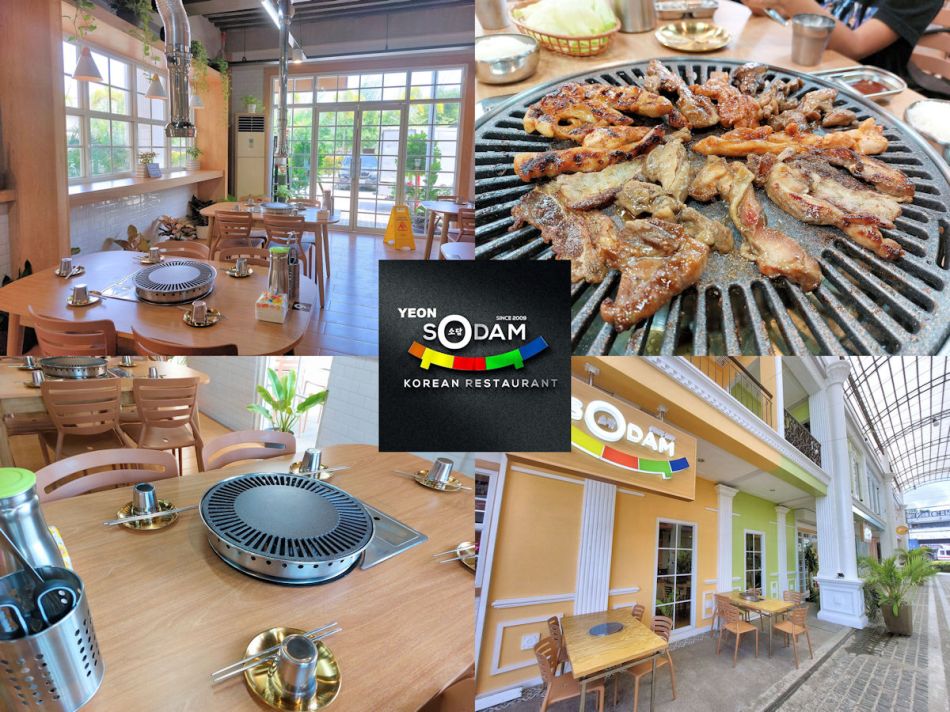 The Bacolod Food hunters had known about Sodam restaurant before but had never gotten around to reviewing it because of several factors.

1.) One of our members (Pat) really hates spicy food and kimchi.

2.) Dr Retovado had written an excellent review about Sodam already!

We liked Sodam right away.  The interior was clean and well-lit and the airconditioner was on full blast!  Everything seemed to have a nice warm glow due to the lighting and the pink wallpaper.  The friendly staff set us up at a table and left us alone to peruse the menu.

Our appetizers arrived and it was very good! Cabbage heart kimchi, regular kimchi and cucumber slices.  Kimchi is fermented pickled vegetables and it is perfectly safe to eat.

One of the dishes that we got was this korean stew which featured a crazy assortment of dumplings, vegetables, noodles, egg, fish sausage and slices of cheese all mixed up in a sweet gochujang sauce.  Although the sauce was sweetish, it was still very spicy prompting us to ask for softdrinks.  Much to our surprise the waiter gave out free softdrinks! (Standard restaurant practice!!!)

We ordered beef bulgogi and it was perfect with lots of sweetish sauce and it went so well with our bowl of rice!

We also ordered some kimbap to round out the monster meal that we had.  Kimbap is korean sushi and it comes stuffed with ham, cucumbers, pickles and all sorts of stuff.

We also chose Korean Pata tim which was very interesting.  It is sliced Ham hocks that you wrap with a leaf of chinese cabbage and dip into crushed ginger and chili sauce.  Very good!

Sodam is a great fun place to eat at.  The food is spicy hot and perfect for those who love veggies and spicy food.  Sodam is great for family dinners or for adventurous barkadas!  Try them out!

Sodam is Located at Lacson Street.