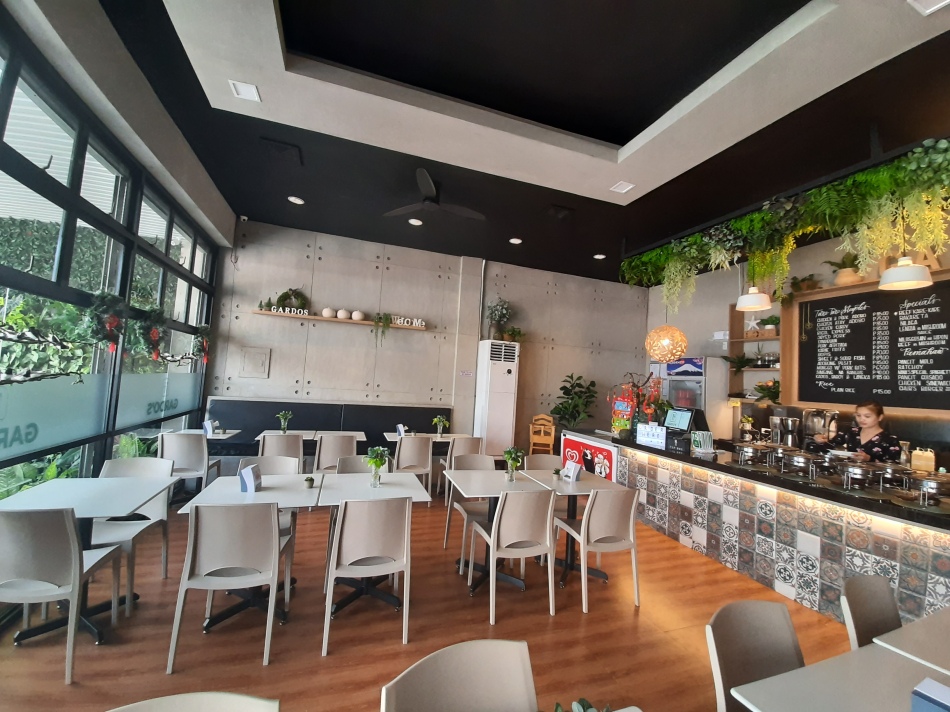 Heads up people! Gardo’s Lutong Bahay is a new restaurant in Bacolod City that is modernizing the carinderia experience.

A carinderia in the Philippines refers to a small food stall that offers pre-cooked food. Carinderias are practically found everywhere in the Philippines and their most common trait is that they are simple and that food safety and cleanliness is something that is sorely lacking.

Gardo’s Lutong Bahay will definitely throw you guys for a loop. They’ve modernized what a carinderia should be. The place is amazing! When we passed by the store we thought that it was a fancy cafe and restaurant.

We actually went in looking for cakes, desserts and something sweet to eat. Boy, were we surprised to learn that this place serves Filipino dishes a.k.a Lutong Bahay!

The ambiance is fantastic! The place is clean, well lit, fully air conditioned and it looks like a modern coffee shop. We realized that they were a carinderia when we saw the menu and the chafing dishes.

Now here’s something that you don’t see in ANY carinderia in the Philippines. All the dishes at Gardo’s Lutong bahay are in chafing dishes and with proper LABELS.

But the surprise doesn’t stop there. Each dish is lovingly arranged and garnished so that if you’re the first one to buy a dish – when you lift the lid, the whole thing looks appetizing!

Gardo’s Lutong bahay serves the typical dishes you would find in a carinderia. The presentation is nice, just like in a high end hotel.

Here are some of the dishes they had on display:

Sweet and Sour fish – a Chinese Influenced dish. Chunks of fish are battered and fried then mixed with a red sweet- sour sauce. Very popular in the Philippines.

Bicol Express – A dish from the Bicol Region of the Philippines. Bicol is known for its spicy food. This dish combines coconut milk, chilies, shrimp paste and pork. This dish is named after the Manila to Bicol express train.

Soyed Pork – A dish of Pork stewed in soy sauce.

Karne Frita – A Spanish dish which literally translates to “Fried Meat”. This is a popular beef dish made with fried beef in a soy sauce base with plenty of red onion and garlic.

Gardo’s Lutong Bahay elevates the look and appearance of a Carinderia. They give this genre of restaurants a much needed boost in image and quality. Definitely worth a visit.

We’ll be bringing our guests here to Gardo’s Lutong Bahay. We can’t wait to tell them that we’re bringing them to a carinderia (cue groans and complaints) and then spring this surprise on them! We’re pretty sure they’ll be impressed with this awesome restaurant.

The Bacolod Food Hunters did not ask for or receive payments or freebies for this article. We pay for our own food. We blog for free.