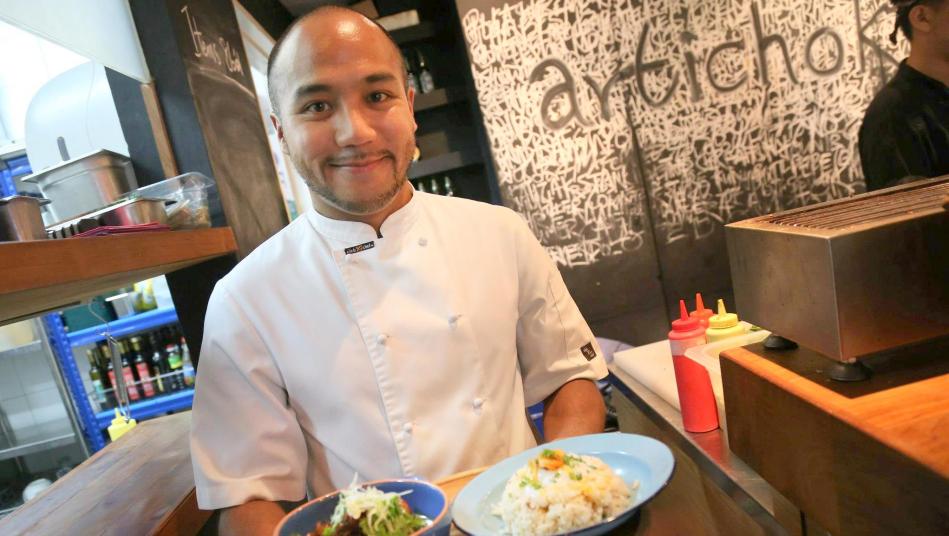 We’ve known Chef Jayps for years but due to his busy schedule this is the only time we’ve gotten to sit down and really talk to him and take him on a food hunting expedition in Bacolod!

BFH: I heard you went to Singapore recently?

CJ: I frequent Singapore because my sister lives there and my friend opened up a middle eastern restaurant and two years ago I was part of the opening team so I stayed in Singapore for a month, spent about a week in his kitchen just to help around and learn new things.

Around 1 month ago I was a guest chef at his restaurant so I cooked Filipino brunch.

BFH: What’s the name of his restaurant?

BFH: You said you worked there several years ago?

CJ: Yes, I helped him open the restaurant.

BFH: How did you meet the owner? What’s his name?

CJ: Bjorn Shen. He was my classmate at Cordon Bleu in Sydney back in the early 2000’s. We’ve been friends since then.

BFH: Is he Singaporean?

CJ: Yes he’s Singaporean. When I first opened Mai Pao, on it’s third year he visited Bacolod for the first time and then he cooked at Mai Pao and then after when I opened Mushu he came around during its second year he was also there. So this time it’s MY turn!

CJ: He was very competitive. Very organized. A true singaporean.

BFH: Did you get along with each other?

CJ: Uh…yes because we liked the same girl so that was the common denominator… <laughs>

BFH: So how was the work during your first time at Artichoke. What was your Job?

CJ: Since he got me based on my experience with Mai Pao and since I’ve opened two restaurants already I helped him with the nitty-gritty stuff…

BFH: Did you work your way up from dish washing to head chef?

CJ: No no, I started as a commie. A Commie is a line cook. Daw kwan bala… you’re a soldier. The lowest rank is line cook 3, then line cook 2. I worked my way up to line cook 1 but I didn’t really go through the hierarchies.

BFH: So what was the experience like, working at Artichoke 2 years ago?

CJ: It felt like Australia in the sense that everyone’s equal in a way and the standards were high, cleanliness was at an extreme. It was good. Efficiency was there. It was quite refreshing.

BFH: So what did you learn from the experience?

CJ: I experienced again the hardships of opening a new restaurant, I learned how hard it was again. I learned a lot from Bjorn because BJorn is a grabe na tao. He’s well informed, he’s a very technical na person while I learned that I’m a very creative person so I learned the technical side of things.

BFH: Were there any funny moments or fun stuff that happened during your stay 2 years ago?

CJ: When it’s not busy a lot of fooling around happens!

BFH: This is an all male staff right? So you all play pranks on each other?

BFH: Who gets pranked the most?

BFH: YOU get pranked?

BFH: <laughs> So you bully the dishwasher but you’re friends right?

CJ: Yeah yeah, we’re friends but I play pranks on him all the time.

BFH: So what are the pranks you pulled on him?

CJ: I placed an eggplant in his shorts, I gave him a very sunog na pot…

BFH: You burned it on purpose?

Cj: No, I just didn’t soak it in water… just giving him a hard time. but during service time wala na jokes.. Wala na lango lango.

BFH: So how’s your relationship with the staff?

CJ: Oh we were very close. We were like brothers. I miss that part of being one of the team because when you’re the boss you have to have that gap between your employees.

Over there I was part of the team. One of my jobs was to make sure everyone got along.

BFH: So are singapore tastes different from filipino tastes?

CJ: Actually it’s similar because they also have a Malay influence, they have coconut, they use lemon grass, they eat a lot of rice.

BFH: So a filipino could go to Singapore and feel at home?

BFH: So you returned to Artichoke last month and cooked there>?

CJ: I was there again for 5 days. I had a 1 day Filipino brunch special menu.

BFH: How did it feel coming back there?

CJ: It felt great because the restaurant was doing well and nag “blossom” na bala and their menu has improved and grabe ang level up sang ila cooking. And then the restaurant now has a certain vibe, a certain energy and they’re full most of the time.

BFH: So what’s on the Special menu that you made?

CJ: Haloumi cheese is like Kesong puti. I also made salted egg salsa and chili garlic vinegar. The chili garlic was very interesting. Siguro 90% of the ingredients came from Lucky Plaza.

BFH: How was the turn out?

CJ: We had 145 covers for a 80 seater restaurant. We started at eleven and ended at three. Grabe, I would say 70% of the diners there were caucasian and 80% of their orders from the Filipino brunch and the most popular dish was tortang talong. They LOVED it.

BFH: Were there any filipino fans that came?

CJ: There were a few who really went out of their way, really came to the restaurant just to have a photo and of course to try the Filipino food. Kung sa Tagalog pa: “Chef ang Sosyal naman ng Adobo na to, ibang klaseng itlog ang ginamit ninyo.” (Referring to the sous vide egg)

BFH: So what dish are you most proud of?

CJ: I would have to say the tortang talong and the bacon chicken adobo.

BFH: Describe in three words why the tortang talong is a must try.

CJ: First of all…

CJ: <grins> Made of Bacon belly.

BFH: <laughs> Dayaon gid ya! So for people who missed out on your Singapore brunch, they can also find these dishes at Mushu?

CJ: Yes at Mushu and at my soon to open restaurant in Manila.

BFH: Oooh! What’s the name of your new restaurant?

CJ: Umm. I can’t tell you the name yet pero it would be serving Filipino food. Reinvented but not confusion. Wala bala gin bastos ang dish.

CJ: Yes! I’m a big fan of hawker food! There’s this one hawker Mrs Ng. Oyster omelet. I’ve been going there for the past 5 years and only this year that I was able to shake her hand. I was starstruck. I introduced myself told her that I was a master chef judge in the Philippines and that I’ve been eating her oyster omelet! From then on every time I would come in she would make sure my oyster omelet was heavenly.

BFH: So is it true that the hardest to please and pickiest people when it comes to food are Bacolod People?

Cj: Well I guess we are very pampered here. We’re very used to getting what we want and when we don’t we whine.

BFH: So Bacolod people are a very fickle bunch.

CJ: Bacolod people once you get them, they’re very loyal. But if you don’t sorry ka na lang.

BFH: Because if they don’t get a good experience during the first time, they’ll never come back!

CJ: If you get their tastebuds they’re yours to keep.

CJ: I always advise my friends never to eat at a restaurant during the first month.. Give it maybe two months..because when a restaurant first opens you get the birthing pains… para you know mayo ang batting average nila.

BFH: So what’s your favorite restaurant in Bacolod? I hear that you drive 45 minutes out of Bacolod to go to this special restaurant.

CJ: Kalanan sa higad dalan. ( in hinigaran) It’s a karinderia by the side of the road. They serve the best porkchops in town, probably the best in the Philippines.

What really amazes me is that they only use 4-5 ingredients in their marinade. I think I like it due to the freshness of the meat, wala kaagi freeze. Fresko guid ang ila baboy. Namit guid.

BFH: So are you adventurous when it comes to food?

CJ: Recently I went with my friend Martin  and David Lopez of Txacho to this hole-in-the wall indian restaurant in villamonte.  (Pure Indian restaurant).

It was mind blowing. When we walked out our clothes were wet with sweat from all the spicy food. It was very delicious.

BFH: How does it feel to be famous? I remember 2 years ago at Bacolodiat when we were hanging out at your stall there were more people asking for autographs than buying siomai.

We couldn’t even talk to each other because of the people. At one point you said bakal anay isa ka siomai dayon may autograph na paaman. Joking apart, how does it feel to be famous?
CJ: Well I guess ang nami people recognize you as a chef and they make sure you have a great time.

CJ: I get recognized everywhere. Mostly because of the show (Master Chef.) Everywhere, Pinoys who watch the show even in Hongkong come up to me to say hello, smile and take a picture. Sometimes some people who have seen me cooking on Kris TV would walk up to me with a piece of paper and ask me for the recipe and If I have time I would write it down for them.

That’s why every time I’m invited to do a cooking demo I never say no because I want to share what I do.

BFH: Ah! Recently you had a cooking demo in Q.C and one of the audience members was Enrico “Eco” feria, a junior master chef contestant. You called him up to the stage and had him cook with you. He also food blogs and recently he released an ibook of his recipes.  I guess he was so shy that he wasn’t able to really talk with you.
Do you have any message for him?

CJ: Keep up the good work, we’re all proud of you. What’s admirable about this kid is that even if he didn’t progress in the show but as a young person and a young cook he is progressing in his own right so that’s the nami na trait sang bata na si Feria.

BFH: So what have you got as a parting message to the readers?

Thanks for reading!  Don’t forget to click on the ads on our page to help us out!

2 comments on “Cooking in Singapore: An Interview with Chef JP Anglo.”